Why I Marched (and why we can't stop marching) 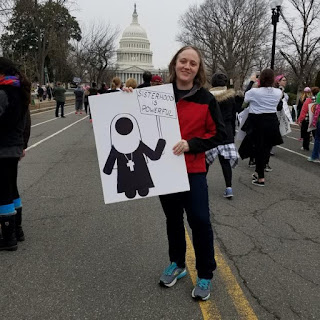 I made my way to the Women's March on Washington last Saturday filled with a mix of excitement and trepidation. I had gone back and forth about whether I should go, torn between a deep-seated conviction that there are matters of basic human rights, dignity and justice that need to be defended, and an internal disquietude about a broad protest platform that included certain positions I didn't agree with.

Holding all of this, I went anyway. Why? Because I believe that I needed to be there — to stand for justice, to express dissent and to use my voice and my being for change.

Perhaps the mix of conviction and fear, passion and trepidation, were exactly what I should have felt. This unease reminded me that justice comes at a price, and as I marched with a sign that identified my religious congregation and named our mission of creating union with all people and with God, I again acknowledged that standing up for what you believe in isn't always easy, and it most definitely isn't always clear cut.

Yet if being a religious sister and studying religious life has taught me anything, it's that sisterhood is powerful. The Women's March on Washington (and around the world) only deepened that conviction for me. It also deepened the belief that unity is the path to the future.

When we strive to engage one another in honest, open and often uncomfortable conversations, we emerge the better for having done so. I can't say that I support everything the Women's March was about, but I can say I support enough. I've given my life to a Love that's greater than myself, and that gift calls me to live my life in defense of all of God's creation. I believe in a world where we engage one another's voices and, in so doing, engage in one another's lives.

When we seek unity in this way, relationships guide the way and everyone gets a place at the table. As Shirley Chisholm, the first African American woman elected to Congress and the first woman to vie for the Democratic Party's presidential nomination, once said, "If they don't give you a seat at the table, bring a folding chair."

We come to recognize that, beyond any one person or group, the table is large and the conversation we're engaged in is much larger and much more complicated than what we may have first imagined. Yet together we work with one another to find common ground so that the common good can flourish. 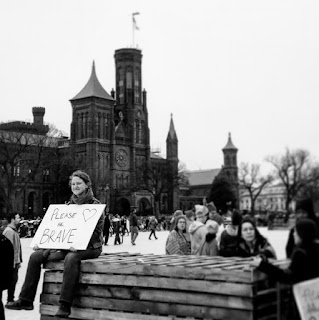 In the days since the March, I've watched as social media has erupted with debates over whether the Women's March was welcoming of all women or just some. The argument is that if you didn't fit a specific stance . . .  if you weren't pro-choice, there wasn't a place for you.

I've watched as fine, upstanding religious women and men have been slandered for supporting the Women's March — called deplorable names and lambasted for asserting that to be "pro-life" is to defend all life — unborn, marginalized, impoverished, incarcerated, trafficked, immigrant and so much more.

That is what it means to be pro-life: to defend the life of every person, even those you don't necessarily agree with. To recognize that every person deserves a voice and to take a stand so that what is right rises to the fore.

Women deserve equal rights. We deserve a world where all people have access to healthcare; where the water we drink is safe; where race isn't a qualifying or disqualifying attribute; where children can be brought up in loving families; where the press is free to report; where facts matter and righteousness and compassion are the principles we live by.

I believe in a world where all people are free. I cannot be better than my brother or sister; my good is their good, and that is the Common Good. In an age of "America first," there's a paramount conflict with the belief that the first shall be last and the last shall be first.

I marched on Saturday for the least of my brothers and sisters because I live my life in union with God working for the least of these. I marched for the uninsured woman I accompanied through treatment for breast cancer, which could have been caught by access to preventative care. I marched for the asylum-seeking family my sisters welcomed into their convent so that they would have a home as they tried to find safety and welcome in a new land. I marched for the children in our schools who don't know where their next meal will come from after they go home. I marched to defend the arts which have transformed my life. I marched in honor of all the strong women who've formed me and have given me the gift of faith. I marched for my sisters who couldn't; for the sister who days before the march tucked a 10-dollar bill in my pocket to help pay for my transportation because she knew she physically wouldn't have been able to march that long.

I march in faith, hope, and love — in faith that our voices matter, in hope that democracy lives and in love of my dear neighbor.

Those are ideals for which we can't stop marching. It is the power of our faith and the call of our baptism: to love God and neighbor without distinction...Continue Reading Here
Posted by Colleen Gibson at 3:23 PM No comments:

There are some times in life that just need the light of hope.  At New Years, I helped give a retreat at Genesis Spiritual Life Center in Westfield, MA; that experienced was blessed.  Not only did it provide a prayerful pause for retreatants, but it also gave me a chance to look back on my year with new eyes, eyes of hopeful reflection and grace-filled review.  What I came across as I prepared my remarks was a poem from this past summer that I never published.  It didn't strike me as something I necessarily should until someone asked for the title of the poem during my talk and I gave it to them only to think to myself- "they're going to search that title and never find the words that go with it!"

Written before my reflections on brokenness & Christmas, "In a bar room booth & hospital bed, 6-16-16" dwells on the way light comes through even in the darkest moments and how Light is being born in us and around us all the time. God is waiting to be found- in people... in places... in moments.

Coming to that realization and finding these words was a grace. I give thanks for it and for the gift of relationships that fill my heart and soul.  May you find those moments in these dark days and let their light shine in all you are and do.

What is that moment
when you realize
that all your love
is caught up
not just in moments
but in the people
who inhabit them
And one small glance
One tiny nod
One heartfelt laugh
unleashes the floodgates
of a life and love you
long for and belong to.
That moment is a gift
and like all the gifts
of love we must do our best
to savor it.
Posted by Colleen Gibson at 11:22 PM No comments: