Expect Nothing. Experience Everything.

One of the greatest pieces of advice I received from an RA during my undergraduate career was: don't have any expectations.

Well that's kind of morbid and depressing don't you think? Well, yes and no.

Expectations allow us to dream about what is to come. If you never expect anything then you really don't have anything to hope for or strive for- do you? It is in our expectations that we envision what lies ahead, both for good and for bad. So if you never expect anything, can you ever achieve anything? Or does living without expectations simply make what you achieve/ what happens to you more serendipitous or does living without expectations require more or less work to reach your goals?

After all, goals are expectations- aren't they? If you didn't expect to reach your goals, there would be no point to making them in the first place. To expect something is to set a standard for which to strive. So if the fateful advice my friend gave to me was to not have any expectations, he must have been one un-motivational RA (he wasn't the best, but I digress).

Yet, I remember that advice from my freshman year and even more, I followed it. (and I didn't turn out that much worse for the wear, right?... right?!?!!?) It's not that you shouldn't have expectations, it's that you have to be realistic and, sometimes, you just need to realize that no matter what you expect, you can't (nor should you try) to predict what exactly lies ahead.

I'll never be able to have no expectations and to try to eliminate them from my consciousness would be unhealthy. What I can do is keep my expectations from inhibiting my actions. Expect the best but don't push it; be honest enough to experience everything that comes your way; and allow the experience dictate your expectations, not vice versa.
So I bring that piece of advice, which came to me before my first spring break service trip, with me as I get closer to Philly. I'm trying not to have too many expectations and not having a ton of information about my job, our orientation, or my community mates is making that a lot easier. In a way, it is forcing me to detach from any presumptions I could I have and, in so doing, I'm realizing that those expectations and assumptions I do have about the program, where it will lead me, and what the year may hold are ungrounded and unjustified. (I still have them but now they come with a grain of salt.) For good or for bad, expectations won't get me anywhere- being true to this experience, the emotions it raises in me, and the new thoughts, prayers, and, ultimately, expectations it plants in me will take me to places I never could have imagined.
Posted by Colleen Gibson at 2:43 PM 4 comments: 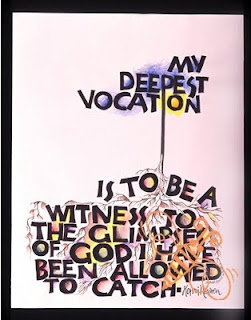 In less than a month I leave for the SSJ Mission Corps in Philadelphia. I'll be living and working in the Kensington neighborhood of the city. My days will be spent in service at Visitation Parish and the Cardinal Bevilacqua Community Center as the Coordinator of Outreach Services. That position entails everything from managing the St. Vincent de Paul Society for the parish, running the food pantry, and overseeing and assisting with any assortment of programs at the CBCC.

The process that has gotten me to this point has been long, arduous, and full of discernment, not to mention twists and turns that landed me in a place I never thought I would be at 6 months ago.

Since graduation from college, service had called out to me, so I wasn't surprised when that call arose again in the Fall of last year. When I began looking for service programs in mid-October I ran across a program run by the Sisters of St. Joseph based out of the Twin Cities in Minnesota. For the last year I've been spending time with the Sisters of St. Joseph and looking at the description of this program I fell in love with it pretty hard and fast.

Wait a second, you might be saying to yourself, she said she's moving to Philadelphia... last time I checked Philly was in Pennsylvania not Minnesota! Correct you are.

I fell in love, and at the time I didn't know exactly what with. My gut reaction told me that it was this program in MN and for a long time that's what I believed. Based on that, I visited Minneapolis, went through the entire application process, interviewed via skype, was accepted, interviewed with a placement site and then decided MN wasn't where I was meant to be. Of course the story wasn't/isn't that simple, but to recount all the emotions and situational changes involved would be a roller coaster ride that I would have trouble putting into words and even if I tried, I'm pretty sure you would have just as much trouble trying to deceipher it.

Leave it to say that some time after visiting the program in MN, I was hanging out with the Sisters of St. Joseph in Philly for a justice event and each time I would tell a sister that I was looking at this program in Minnesota, they would mention to me that they had their own, albeit new, program. Each time this happened I would brush it off- I was going to MN afterall- but after much talk (see: persistant talk bordering on nagging), I was convinced to talk to a current SSJ Mission Corp volunteer, if only to tell the sisters "I told you so".

Well what I expected to be a 15 minute phone conversation turned out to be an hour and 15 minute phone conversation. I heard a lot of things I liked and having filled out enough applications to choke a horse, I threw an application together for the SSJ Mission Corps that very night. Soon enough I was invited to Philadelhia for an interview with the program. What followed was an interview with MN, finding that I was in love with service and my desire to serve blinded me to some pretty aggregious faults between myself and MN, and some heart-to-heart talks with some close friends and the big G-O-D.

All of these realizations allowed me to decicively say "I'm not meant to go to MN... I may not know where I'm meant to go, but Minnesota, I'm pretty sure, is not where I'm being called." And so I declined my spot in MN... without having been accepted to Philly yet.

While my interview with Minnesota threw up some major red flags, my interview in Philadelphia was challenging and life giving. The challenge was in questions that dug deep and really made reference to who I am and how I had shared myself in my application (not to mention that because I threw my application together last minute from a variety of sources, I wasn't exactly sure what stories I had and hadn't included). The vitality of the interview came in interviewers who genuinely and respectfully handled my application, who cared to ask deep questions, and who, in return, allowed me to ask deep questions of them.

As I waited in discernment limbo to hear from Philly, I knew that these women and this program despite its faults in some area was ultimately the place for me. When Julie called to invite me to join and gave me 3 weeks to make my decision I told her I'd get back to her by the end of the week- at the latest. At this point, I was at the end of a year long discernment (well not really, but for this entry's purpose I guess I could say a resting point after a year of discernment) and could say yes despite all the unknowns before me.

I still am filled with questions and the unknown hasn't gotten any more known, but I'm ok with that. Lots of people think I'm crazy. Crazy to pick up and move; Crazy to pursue such an unknown; and crazy for leaving a full time job to do so. Sometimes when I sit down and think about it, I honestly think I might be a little crazy. But then my heart beats a little faster, I think of everything that has led me to this point, and I figure if it's for love, what's wrong with a little crazy.
Posted by Colleen Gibson at 12:57 PM 1 comment: