As many of you know, in addition to writing here on the blog, I also put my pen to real paper from time to time.  You can find some of the publications that I've written for on the right hand side of this page, but today is a special day.

Today, my reflection "Take My Hand"  was published in Give Us This Day, the fabulous worship & prayer aid from Liturgical Press. Usually these reflections are subscription-only, but today's was re-published on Pray Tell, a wonderful blog of worship, wit, & wisdom. So, in case you missed it, click on the link and check it out!
Posted by Colleen Gibson at 11:24 PM No comments:

I lit myself on fire once.

Written during (not for) the opening of Chapter 2014, Philadelphia via Concordia, KS
I lit myself on fire once.
Not on purpose, but still.
The match I intended to blow out
consumed my hair and eye lashes.

All around me was a flash
of light and heat
and in my heart
was panic.

The mystics speak of being set
on fire
by the Love of God,
in a Love all-consuming.

I'm sure it comes like a flash
and I'm sure fear must be
extinguished first
or it won't burn bright for long.

I feared I'd be disfigured
that my whole self might go up
in a cloud of smoke.
Singed and shaken I emerged.

But I imagine when God sets a fire
it is a controlled burn
it gives life even as it takes it
and only singes what resists.

The blaze is set deep within
no puff of smoke or putrid smell
only life,
the most combustible fuel of all.

You can't set that type of fire yourself
No, it is a flame beyond
your control
If you try, you're bound to get burned.

As a child, they told me
not to play with matches.
You'll set yourself on fire.
How right they were.

I was set on fire once
through no fault of my own
I consented to being consumed.
I could not hold the flames at bay.

Let go and let it burn my Love
whispered in my ear.
A flash of tongues about my head,
White hot passion in my soul.

Love in the Walls

I found myself today in a church on the banks of the Mississippi River. There after passing under the St. Louis Arch and escaping the smoke stacks of East St. Louis, Illinois, I settled into the silence of Holy Family Church.

From the outside, the church appears as if it is falling down. The walls slant inward- large, dark timber boards set to stand vertically and patched in-between with a plaster made of mud, hay, hair, and anything that will bind.  The sight of it is arresting.

This is a building from a different age- a building out of place. And yet, it stands.

It is here that my sisters were sent in 1836 after they arrived in St. Louis. After a long journey from France, three of the six Sisters of St. Joseph sent to the New World found themselves across the river in Cahokia, Illinois.  After a treacherous journey up and across the river, I can only imagine that they fell gently into the silence of Holy Family Church.  The log church has stood since 1799 and so as I sat in its silence today, I could only imagine that my sisters, centuries removed, sat there with me.

The feeling of connection is hard to describe. Running my hands over the Black Walnut timbers, I could feel the marks of settlers' axes. The wood, they say, is now petrified. The logs probably wouldn't burn if you tried to light them; they simply stand still and silent, pillars solid as stone.  And my hands run over what I imagine our founding mothers' hands ran over- beams that signified something solid after months of travel.  It was here that they were called to serve. Here that they could begin the life they had left France to pursue.  Here that the unknown became a little bit more knowable.

Sitting in that church today, I could only imagine all that they went through. Soaking in the silence, I could sense their prayers, their devotion, their love... it was right there in the walls... walls that should have fallen down in the great New Madrid earthquake in 1812, but didn't. Walls that sustained themselves by their very slant inward; leaning in, they buttress one another.  When one portion of the structure gives, the rest moves to support it. And so, it is with love.

"I have grasped you by the hand; I formed you, and set you as a covenant of the people, a light for the nations." Today's first reading from Isaiah proclaims, "bring forth justice to the nations, not crying out, not shouting, not making [your] voice heard in the street." No, by none of that do you bring justice. Only by your love will justice come, a love that ultimately is God's love in you.

As our tour of the old log church came to an end, our guide brought us over to the new stone church to return precious artifacts to the parish safe. The church was in the midst of the frantic transition out of Christmas. Poinsettia leaves were scattered across the carpeted floor, crunching beneath our feet. A few women from the parish buzzed about with brooms and carts. Here, amid the energy, I was struck by far less historic stained glass windows. As I pulled my camera out, to take some pictures of Christ the Sower and Christ the Giver, my group slowly exited the church.

By the time I looked up, I was alone in the sanctuary with one woman working away.  I thanked her for having us and complimented her on the beauty of the Church and the windows. "You're very welcome" she replied, "I only wish you could see the full effect without this mess."

I smiled politely and excused the leaves as par for the course. "Really" she responded moving toward me behind the altar, "I wish you could see this."

She reached up to shift a curtain on the stone wall. "There's Love in the wall." she said.  Moving the curtain to the side, she pointed up, "Don't you see it?"

Sure enough, I could make out a rudimentary "L" in the line of the stone. "It's Love" she said, "This isn't the best view, but it's there."

"It sure is." I replied with a smile.

It was there in that wall and in the heavy wood walls of the log church, a love that buttresses itself, that stands tall even when it seems like it should fall over.  It doesn't shout, it simply is. I thanked her again for her service and for taking the time to talk with me.

Walking up the center aisle of the church, my heart paused for a moment in all that the day had been. And as I joined my group again, my heart simply said, "There's love in these walls." 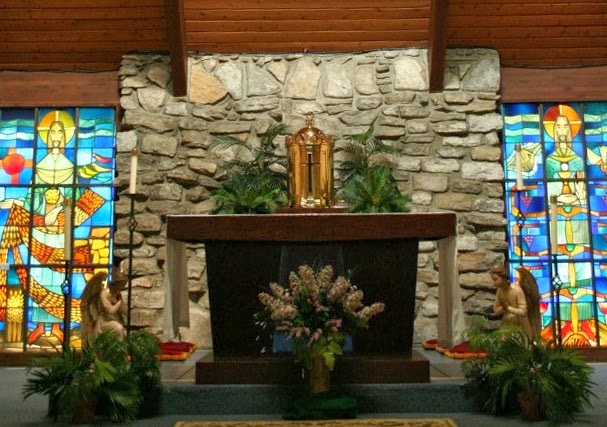